Showing posts from 2008
Show All 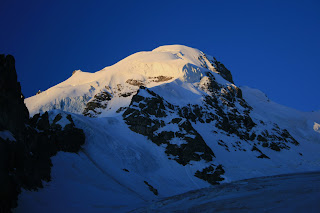 Pik Profsoyuzov is a modest 4100m snowy peak that forms part of the Shkhelda group in the Caucasus. It seemed an ideal acclimatisation climb from our camp near the head of the Shkhelda Glacier before our planned attempt at Ushba further East. The climb was graded Russian 2a, which in this case equated to about Alpine AD. Together with my partner Timur we approached the peak via Akhsu Left Glacier to the West of the peak from where we gained the normal route. We ascended 45 degree slopes to a col, then followed easy ground East beneath a high band of seracs. We gained the snowy North-Easterly Ridge and followed this to the summit. Having been dogged with knee injuries ever since my trip to Pakistan two years ago, it felt an emotional return to the high peaks where I belong.